Andy Reid held a press conference Monday and updated the media as to the severity of Brian Westbrook’s injury, or lack thereof.  Westbrook left the Pittsburgh game after he stepped on his own teammate and landed awkwardly on his other ankle.  Although Westbrook limped off the field, it didn’t look too serious.

During the press conference, Big Red stated that there was no ligament or tendon damage.  Reid stated that Westbrook’s status is day-to-day.  The injury is being listed as a sprain and Westbrook hasn’t been ruled out for this Sunday night’s game against the Chicago Bears. 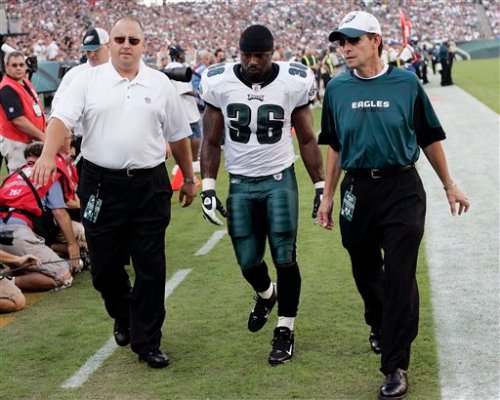 Personally, I think the Eagles play this one safe and plan for the Chicago Bears without Westbrook in the lineup and let him get back to 100%.  I think we can handle the Bears without him and this will give some key reserves the reps they desperately need.

Comments Off on Brian Westbrook is Officially Day to Day