Eagles’ coach Andy Reid revealed Monday that superstar running back Brian Westbrook fractured two ribs in the opening quarter of the Eagles loss to the Redskins on Sunday as reported earlier by my cohort, the 215 Sportsguy.  His status for Sunday’s game in San Francisco is uncertain at the moment but dont worry, we expect his little bro Byron Westbrook to release his diagnosis on Wednesday. 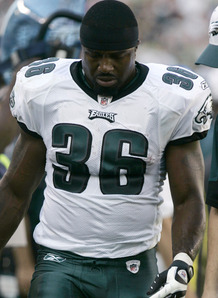 If it were my call; Do NOT play him.  We all realize that the Birds have already dug themselves into a hole, but unless they feel they are already in panic mode there is no reason to trot him out there.  And like the Bears match up (which is actually making me rethink this whole train of thought, shit put him out there, we’re already tanking) if the Eagles cannot beat the 49ers WITHOUT Brian why was there all of this Super Bowl or bust talk coming out of Lehigh?

2 responses to “B West Just Rest”