Sixers Lose to the Lowly T’Wolves

The Timberwolves came into Wednesday nights game as the worst team in teh NBA having lost eight in a row. Go figure they would happen to snap that streak against YOUR Philadelphia 76ers last night.  Just our luck right.

Al Jefferson scored six of his 25 points in the final three minutes to lift Minny to a 102-96 victory over the Sixers on Wednesday.  Craig Smith scored a season-high 21 and matched a career high with five assists.  Mike Miller had 10 points, 10 rebounds and six assists for the Wolves, who won for the first time since the season opener against the Sacramento Kings. 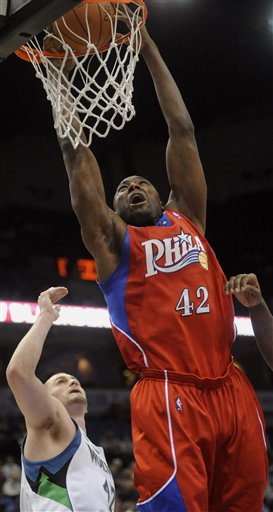 Elton Brand was the lone bright spot for the Sixers, as he finished with 19 points and 13 rebounds. The Sixers committed 16 turnovers and missed eight free throws while losing for the first time in four games.

Next up for the Sixers are the Los Angeles Clippers on Friday night from the Wach.

Comments Off on Sixers Lose to the Lowly T’Wolves