Claude Giroux put on a show Sunday as the young rising star totally redeemed himself after taking a bad penalty at the end of Game 2 which really cost the Flyguys Friday night.

Jeff Carter opened the scoring fest for the Flyers early Sunday with a beautiful sweeping backhand shot 3 minutes into the game, and Richards made it two goals on two shots for the Flyers two minutes later.

Pittsburgh battled back and tied the game up early in the 2nd period off the stick of Evgeni Malkin, who landed his second goal of the game.  The first came with 10 seconds left in the first period on a savvy play by Maxim Talbot to center to the puck to a streaking Malkin for the one timer.

With the crowd silenced after the equalizer, the Flyers roared back on the heels of the rookie Giroux.  Danny Briere stole a rebound off Marc-Andre Fleury’s pad and fed it across the ice to a streaking Giroux, who punched in the puck for a 3-2 lead. Playing short-handed midway though the second, Giroux controlled the puck behind the net. The Penguins defense swarmed him, but the former first-round pick was able to fend off Kris Letang and slip the puck to Gagne. Gagne scored the short-handed goal to make it 4-2 and the Flyers never looked back going on to win 6-3.

With the win the Flyers closed the gap making the series 2 games to 1 in favor of the Pens.  Game 4 is back at the Wach Tuesday night with the puck set to drop at 7:00 pm.

Briere Out 4-5 Weeks with Groin Strain

Flyers center Danny Briere will be out four to five weeks with a severe groin strain.

Flyers general manager Paul Holmgren said on Wednesday the injury was significant and was expected to miss at least a month. Briere left Tuesday night’s win over Tampa Bay after the second period after missing the previous nine games with a groin strain.

Mike Knuble scored two goals, including the tiebreaker at 14:52 of the third period, and the Flyers beat the Dallas Stars 4-3 on Monday night en route to their fifth straight victory.

Philadelphia opened the season by dropping its first six games. Then, after winning four straight, the Flyers lost another three in a row.  Scottie Upshall and Jeff Carter also scored for the FlyGuys. Gagne extended his points streak to eight games with a pair of assists on Knuble’s goals.

Mike Modano scored twice and Landon Wilson had a goal for the Stars, who have lost three straight.

Up next for the Flyers are the Carolina Hurricanes on Wednesday night.

Comments Off on Knuble Leads Flyers to 5th Straight Win

The Flyguys have changed the start time for their Oct. 25 game against the Devils to 4:00 pm to avoid a conflict with Game 3 of the World Series between the Phightin

s and the Rays.

The Philadelphia Phillies will play their home game of the series across the parking lot at Citizens Bank Park later that night.

The Flyers were originally scheduled to play New Jersey at 7 p.m.

Pascal Dupuis scored on a slap shot from along the edge of the left circle with 10.8 seconds left in overtime as the Penguins kept the Philadelphia Flyers winless after beating them 3-2 on Tuesday night.

The Flyers tied it at 2 with goals from Jeff Carter and Simon Gagne in the final minute of the second period only to fall short in OT.  The FlyGuys have dropped their first three games for the first time since the labor dispute-shortened 1995 season.

Comments Off on Flyers Remain Winless

We Bid You Adieu Sami

Glen Macnow of 610 WIP is reporting that Flyers winger Sami Kapanen is retiring from the NHL to play in his native Finland. Kapanen has been a Flyer for the last five of his 12 NHL seasons.

Good luck to you Sami, you will be missed.  He was a tough and dedicated player who did everything that the coaches and organization asked of him.

Comments Off on We Bid You Adieu Sami 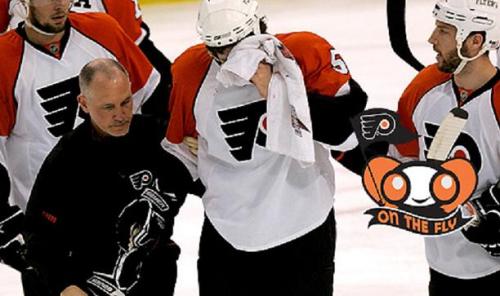 Caption: Right in the Kisser

Comments Off on Coburn takes “Puck to Face”

Filed under Flyers, Pic of the Day

What the Blood Clot?

As your Philadelphia Flyers prepare for game 1 of their Eastern Conference quarterfinal match-up against the Penguins, last night defensemen Kimmo Timonen, the man who was going to be primarily responsible for keeping Sidney Crosby, was lost for the series.

In game 4 against the Canadiens, Timonen blocked a shot that deflect off his left ankle and after playing in severe pain in the game 5 clincher, Timonen had a MRI earlier in the week that did not reveal the clot. But after going to the hospital yesterday, a surgeon discovered the clot. BING BANG BOOM, out for the series.

Yes I am being Neg – adelphia right now. But why should we expect anything else? Every time we get close to the promised land, something out of the blue arises. Joe Carter, Marshall Faulk, Ronde Barber, Ricky Manning Jr, Bill Beli – cheat, going against a team on a 20 game win streak in the playoffs (Colorado Rockies), Shaq and Kobe. There always seems to be something and now this.

Our best defensemen is now out for the series and the Flyers must adjust on the fly. But still feel confident Flyers fans, Derian Hatcher’s new line mate will most likely Braydon Coburn, the two of them were paired earlier in the season and were very successful together. And now look for Coburn and Hatcher to share the responsibility of shutting down Ev-gay-ni Malkin, and Sydney Cunt-sby, and look for fine results. And if Marty Biron continues on the pace he has set all post-season, although YES this loss is a huge blow, it might not quite be fatal.

Comments Off on What the Blood Clot?

Comments Off on Hardest Hockey Hit Ever

Down to the Niitty Gritty

With only 16 games remaining, the Flyers gained a very important point yesterday in a shootout loss to the hated New York Rangers.  They are currently two points behind the Rangers and hold the 8th and final playoff spot.

As the season winds down and after watching a shaky first period yesterday, I ask you this; Does having two starting goalies help or hurt this team?

Antero Niittymaki and Marty Biron are both great goaltenders and need to see ice time in order to stay sharp and focused for the upcoming playoffs.  I feel that having two starting goalies on this hockey club has both its positives and negatives.  On the positive side, I believe it provides great depth in the case of an injury at a position that is usually tough to fill with premier players.   It also provides the Flyers with great trade bait as many teams are constantly searching for the next great goaltender to anchor their team.

However, I believe the constant shuffle between starting goaltenders is taking its toll in a negative way.  Niittymaki who has been sidelined for a few games in favor of Biron looked awful out there in the first period, giving up three goals on 13 shots.   He came out flat, and looked pretty rusty out there, reacting what seemed to be seconds late to a few of those shots he let get by.  In the second period he gave up a fourth goal, prompting the pull and allowing Marty Biron to take the ice.  Marty played great stopping all 21 shots fired his way.

Don’t get me wrong, I love Antero as a goaltender on this team, but I think it needs to be set in stone who our “starting” goalie really is.  With the playoff push in full swing, Marty needs all the work he can get especially against a division rival and higher seed in the New York Rangers.   He should have played the entire game and who knows, we might have even pulled out the win and been able to force a tie with the Rangers in the 7th spot.  When asked about why Niitty and not Biron, head coach John Stevens said this:

“One, he had played so much lately,” Stevens explained. “Two, he’s not had a lot of success in back-to-back outings (now 0-4 in second games). Niitty has played well here before. I had a feeling that would happen today.”

Fair enough answer, but not great.  I can see why Niitty would get the start, but don’t you want to push your starter and see what he’s made of as the playoffs near.  I mean, you are going to be playing back to back games in the playoffs and most likely going to be facing a team that is as good, if not better then the Rangers right.  Time to get our game faces on boys and start grinding this out.

How about Jeff Carter?  This guy has been playing incredible hockey of late after lots of trade speculation as the deadline approached.  Two goals in the loss to the Rangers, and one goal and an assist in the win against the Islanders.  During the 3rd period yesterday it seemed like Carter was always around the puck.  With the increased ice time, especially in crunch time, Carter has been a major asset in the Flyers small streak in their last three games.

Comments Off on Down to the Niitty Gritty