LJ Smith Got…. JACKED UP

Eagles tight end L.J. Smith was knocked out of Sunday’s game with Atlanta after being concussed on a late hit from Atlanta’s Lawyer Milloy.

Smith was hit at the end of an incomplete pass down the middle. Donnie’s throw hit a defender in the back of the helmet and Smith turned his head back upfield before taking a lick from Milloy.  I was sitting in the end zone and saw this play right in front of me, and he got jacked the f*ck up and looked to be pretty foggy walking off the field.

Comments Off on LJ Smith Got…. JACKED UP

Eagle’s superstar running back Brian Westbrook is optimistic that he will be in the starting lineup for this upcoming weekends game against the resurgent Atlanta Falcons.

B West broke two ribs on the eighth play of the Eagles’ 23-17 loss to the Washington Redskins in Week 5.  He missed week 4 against the Bears due to an ankle injury and was kept on the sideline during Week 6 due to the rib injury.  Thankfully the Birds had their bye last week (week 7) and Brian was able to rest up and get set to destroy the mediocre Atlanta D.

The Eagles need a win in a big way this upcoming weekend with Dallas on the brink of turmoil and the Giants running away with the division.

Comments Off on Westbrook Optimistic About Week 8

B West sat out of practice for a second straight day Thursday because of a rib injury sustained early in the game against Washington on Sunday.  Westbrook broke two ribs but was able to return after an injection of painkillers. 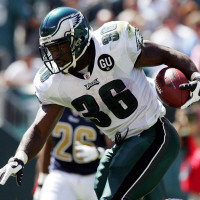 GOOD.  Take all the time you need buddy.  We need you 110% going into Week 8 against Atlanta.  With a bye in Week 7, two weeks of rest is a must in my mind.  We play San Fran this week and I think we should be able to move the ball against a mediocre defense at best.  Mike Martz’s offense however will definitely be a test for our D as he and JT O’Sullivan have been slanging the ball pretty nicely on the left coast.

Comments Off on Westbrook Misses Practice