So the game on Wednesday night was pretty sicko sitting in my girlfriends luxury box and it was one hell of a game.  Dwight Howard did not dissappoint as he is a manchild and Elton had flashes of excellence as well.  Too bad Rashard Lewis had to bang that 3 ball from the corner in the final few seconds to give Orlando the victory.

And on to Sunday’s loss.

Ben Gordon scored 21 points, Drew Gooden had 20 points and 12 rebounds, and the Chicago Bulls rallied from an early deficit for a 103-92 victory over the Philadelphia 76ers on Sunday.

Bulls number one pick Derrick Rose contributed 18 points and 10 assists and reached double figures in assists for the first time in his young career. Former Sixer Larry Hughes had 16 points for the Bulls (8-9), who won for only the third time in 10 games on the road.

Elton Brand had 21 points and 12 boards, and Thaddeus Young added 17 points for the Sixers, who have lost four straight to fall to 7-10. Andre Miller had 15 points and 10 assists, and Willie Green chipped in with 12 . 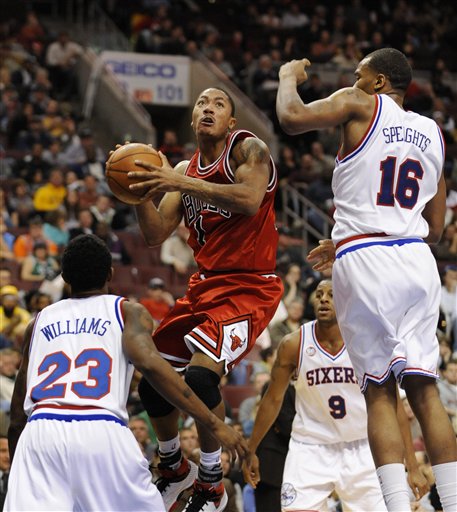 Philadelphia scored a season low 78 points in a 24 point loss at Boston on Friday and has been held below the 100-point mark in seven straight games.  Next up for the Sixers are the Chicago Bulls again tomorrow night from Chicago.

No. 4 – Breakin’ Ankles and Becoming a Superstar

In the final weeks of the Answer’s rookie season, the Sixers were just playing through the schedule as another lottery bound off-season was approaching.

Michael Jordan and the defending (soon to be re-peat) champion Bulls came to the “CoreStates Center” in the first week of April.   Allen Iverson gave us one more to add to his Rookie of the Year highlight reel as he was isolated at the top of the key with the game’s greatest, Michael Jordan. The fans stood and called for his patented crossover, and in true A.I. fashion he delivered, breakin Jordan’s ankles and bringing the “CoreStates Center” down one final time in his inaugural season.

Number 4 in our Allen Iverson top 10 moments in a 76ers uniform, AI versus MJ.