‘The Truth’ Paul Pierce scored 17 of his 24 points in the third quarter to lead the Boston Celtics to their ninth straight win, 107-88 over the Orlando Magic on Monday night.

Ray Allen added 21 points, Rajon Rondo had 16 points with 12 assists and KG scored 15 points for the Celts (17-2) in a win over a top Eastern Conference rival.

Ray Allen scored 21 points and Boston led from the start in winning its fifth straight game, 118-103 over the Toronto Raptors on Sunday.

Rondo, Kevin Garnett and Tony Allen each scored 15 points for the Celtics.  Kendrick Perkins had 12 points and Paul Pierce and Eddie House each had 11 in the win.

Comments Off on Celts Roll Over Raptors

Boston Celtics coach Doc Rivers wasn’t too happy about being forced to play without All-Star Kevin Garnett against the New York Knicks.

Garnett was suspended for one game for hitting Milwaukee’s Andrew Bogut in the face near the end of Saturday’s game.  Rivers said Garnett was hit in the face twice from the side and he flailed out an arm as a reflex.

The suspension didnt matter much as the Celtics went on to beat the Knicks anyway on Tuesday night.

Starting in place of Garnett, Brian Scalabrine came up big, hitting a 3 pointer with 1:14 left to help Boston go onto victory. Paul Pierce scored 22 with eight rebounds, Kendrick Perkins had 16 points and eight rebounds and Rondo had 15 points, eight boards and seven assists.

Wilson Chandler scored 23, and Zach Randolph had 18 points and eight rebounds for New York. The Knicks tried to move closer in the Atlantic Division race but instead lost to Boston for the seventh straight time.

Comments Off on Celtics Win, Move to 10-2

The Hawks came into the Garden Wednesday night with a perfect season intact for a rematch of their Playoff series last year with the reigning champs, the Boston Celtics.

It was one hell of a game and came down to the wire.

Pierce scored 34 points in all, Kevin Garnett had 25 with 12 rebounds and Rajon Rondo had 10 assists for the Celtics.  Joe Johnson scored 28 for Atlanta, finding an open Marvin Williams for the go-ahead 3-pointer with 7.4 seconds left before Pierce answered at the other end, faking out a pair of defenders and sinking the game-winner.

YOUR Philadelphia 76ers opened the pre-season with a thrilling victory over the defending champion Boston Celtics in Beantown on Wednesday night.  To my dismay, this game was NOT televised (WTF Comcast?), a freakin’ Meet and Greet with the Flyers over THIS, the first game of the ELTON BRAND era in the 215.  Christ.

Lou Williams scored 27 points and Thaddeus Young added 21 to help the Philadelphia 76ers beat the NBA champion Boston Celtics 98-92 on Wednesday night in the preseason opener for both teams.

Williams was 7-of-12 from the field and 12-of-13 from the line.  Leon Powe led the Celtics with 12 points and Tony Allen had 11.  The Celtics’ Big Three: Jesus Shuttlesworth, The Truth and KG — got off to a fast start, but played limited minutes. Allen had nine points, on three 3-pointers in an opening burst, while Pierce had eight and Garnett six.

Elton on the win:

This was an important game for us.  Boston has those three great stars. This gave us a barometer to see where we are.

This is a sweet video of the dunk.  Its the TOP 10 Camera Angles of the Dunk.  Take a peak.  YouTube in HD.

Kevin Garnett the NBA Defensive Player of Year had no reponse for this statement. 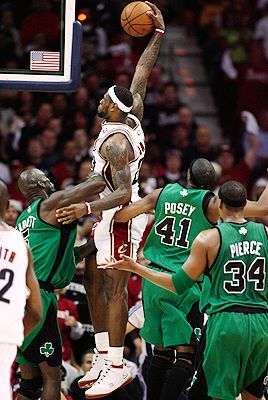 “He can dunk. Especially if you give him a running start at the basket. It’s probably going to be a pretty good dunk and he’s so darn powerful that once he gets up there, there’s not a lot you can do. I hate the fact that he got to the basket.”

Comments Off on WITNESS this KG

Tyreke Evans – Next Star or Next Murder Victim?

Tyreke Evans put Philadelphia high school basketball back on the map last night as he won the MVP award of the McDonald’s All-American in Milwaukee.

Evans, a scoring machine who combines a variety of playground moves and unlimited range, truly brought his ‘A’ game as he finished with 21 points and 10 boards.  Evans added his name to select company in winning the John R. Wooden MVP Award. Past winners include Michael Beasley (2007), Kevin Durant and Chase Budinger ( both in 2006), LeBron James (2003), Dwight Howard (2004) and Kevin Garnett (1995). 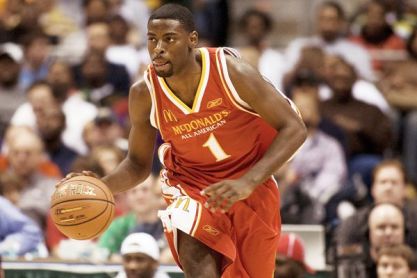 Tyreke is currently undecided on where he will be attending school in the fall with his top suitors being Memphis, Texas, and Villanova.  Personally if I was this kid, I’d get as far away from this city as possible. Why you ask?  Back in November Tyreke witnessed the shooting death of of 19-year-old Marcus Reason by the hands of his 16 year old cousin, Jamar “Mar Mar” Evans.  Mar Mar now faces one count of first degree murder, and one count of third degree murder.

The fatal shooting occurred at about 4:45 p.m. on Nov. 25 in Chester’s Toby Farms section, according to a police affidavit. Tyreke Evans, Jamar Evans, Rasheen “Ra-Ra” Blackwell and Tyreke’s American Christian teammate, Dwayne Davis, had watched the end of the Chicago-Denver NFL game at Tyreke’s aunt’s home when his mother called his cell to tell him some pies she had baked were ready.

According to Tyreke Evans’ account, Blackwell and Davis began yelling, “Go, he’s about to shoot.”

“Davis and Blackwell said they saw [Reason] coming out of an alleyway with a handgun and yelled at Tyreke to get moving, because there was going to be shooting,” Delaware County Detective Michael Palmer confirmed.

“They said they heard a gunshot fired. Tyreke said he ducked behind the wheel and hit the gas.

“Tyreke went on to say he heard a second shot fired that was louder, but he didn’t know where the second shot came from, and he didn’t even know Jamar Evans had a gun until he saw him put it in the front pocket of his hoodie jacket. When they got back to his mother’s house, they started getting calls from friends telling them that someone was shot.”

My dad is a high school basketball coach in the area and through his network of coaching associates and friends, he has heard that this kid has to have a bodyguard with him at all times.  Now that the (215), Philadelphia, has become the murder capital of the world, I would get the F outta here if I was this kid.  As far away as possible.

Evans hasnt had any run ins yet since the incident back in November, but rest assured these thugs have not forgotten what happened to their friend.  Tyreke is quickly acquiring lots of national recognition and fame due to his play on the court but if hes not careful, he might be remembered for the bullseye on his back off of it.