Pros:  Kevin Love is truly a consistent player, scoring in double figures in all 28 games he’s played in his freshman 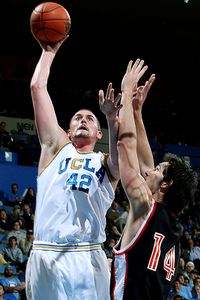 season. Averaging 17 points and 11 boards in almost 29 minutes per game, Love is also very productive. Love’s inside game is powerful and his goto move is a baby hook that is very difficult for college players to defend. He’s got terrific footwork in the paint and can be dominating rebounder on the offensive and defensive glass.

Love’s inside game allows him to shoot over 58% from the field, but he’s a more versatile player than that. He can also step outside and has range out beyond 20 feet. Love is hitting almost 36% of his 3-pointers this year and over 74% of his free throws which is incredible for player of his size. Love is also an excellent passer and can pass out of double teams or run a high post.

Cons: First of all he doesn’t have great court speed. While his size is sufficient to dominate the paint in college, he won’t be big enough to play center and dominate down low in the League. He will have to line up at PF and could have a tough time trying to guard the quicker PF that has evolved in the NBA.  He’s had knee problems in the past and isn’t the best-conditioned athlete in college hoops, though his freshman status may have something to do with that.

Notes: According to Ed Stefanski yesterday on WIP, the Sixers are in dire need of a PF.  This guy could come right in and be the guy that we need.  He has great basketball IQ and even though hes a youngin’, K Love could be on a NBA court near you come next season (depending on where hes projected, he might stay).  His ability to rebound and outlet the ball is simply remarkable.  He would fit right in with the way the Sixers have been runnin’ and gunnin’ lately and be a great person to start the fastbreak with.