Outcome: Could tonight be the night that madness sets in across this city?  I plan on being right in the middle of the action.  From my current location in Manayunk, there promises to be some quality crowd gathering down on Main if the Phils can clinch tonight.  After the Phils won the pennant Main St Manayunk was NUTS.  Fires in the middle of the street, roads blocked off left and right, and as far as your eyes could see was a SEA OF RED.

Cole Hamels takes the mound tonight looking to make postseason history.  He could become the first starting pitcher to go 5-0 in a postseason with five wins coming by way of start.  Opposing him will be the Rays ace, lefty Scott Kazmir.  Look for your Phightin’s to be sitting on cloud 9 and playing their best baseball of the season on the biggest night in their young careers.

This could be title numero uno for this guy’s (two thumbs pointing back at me) short life.  I was born in ’84 so missed out on the Sixers title in ’83.  Although I’m sure my pops was conceiving me right around that time.  And good LORD PLEASE COME THROUGH HERE.  I’m so sick and tired of friends from Jersey constantly bragging about their numerous titles.  Somehow Jersey = New York in the sports world.  Another oxymoron from those retards.

Outcome: Could we witness history tonight?  The Phils look to win the 215‘s first title in my life.  Are the stars finally going to align, this 215 fan is crossing his fingers, knocking on wood as he types this, it appears so after last night’s drubbing and King Cole set to take to the hill for tonight’s game 5.

This Phillies team has been a poised bunch all year and look for that to continue tonight as they take their business approach into tonight and don’t get caught in the moment of clinching a world title.

Look for the bats to continue to explode like last night, and King Cole to be on point once again, continuing the shutting down of the Rays power bats.  The Phils jump on the Rays early and the party will begin early in the game in South Philly as the city will erupt into a party that has never been seen before.

Comments Off on World Series Game 5 Preview: THE CLINCHER

Joe Blanton became the first pitcher in 34 years to homer in the World Series, Howard drove in five runs with two homers and Philadelphia romped over the Tampa Bay Rays 10-2 on Sunday night to move within one win of its first title since 1980. 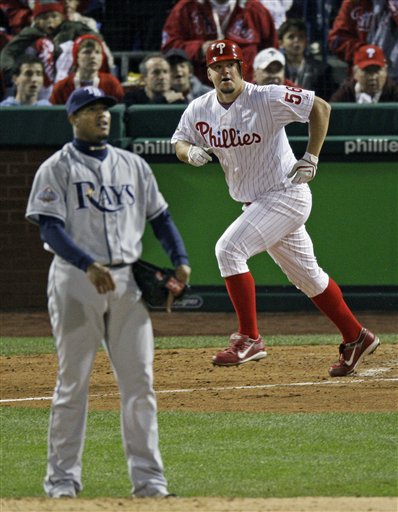 A day after hitting his first homer of the Series, Howard connected twice. The major league leader in home runs and RBIs hit a three-run drive off Andy Sonnanstine that made it 5-1 in the fourth and sent the city into a frenzy. Howard added a long, two-run shot against Dan Wheeler in the eighth to put the game out of reach and the World Series title within the Phils grasp.

Cole Hamels will try to close out the Phillies’ second Series title on Monday night against Scott Kazmir in a rematch of Game 1 starters. Hamels (4-0) looks to make MLB postseason history tonight, trying to become the first pitcher to win five postseason starts in one year.

Comments Off on One Win Away

Outcome: The day this city has been waiting for for 15 years is upon us.  Game time is only a few hours away.  Cole Hamels once again takes the mound for the Phils as Scott Kazmir gets the ball for the Rays.  Cole is 3-0 in this here postseason and look for him to continue his dominace as he takes the Phils deep into the game and keep the hot bats of Rays offguard.  Cole is one of the few pitchers who continually gets better against batters as he faces them two and three times around during the course of the game.  The stats prove it over the course of the regular season and I see no reason as to why that would change now.

A lot of folks are bringing up the added rest as a possible downfall for the Phils, but this team is as gritty as they get and look for them to come out swinging.  I foresee the Flyin’ Hawaiian Shane Victorino and Pat ‘The Bat’ Burrell to get the juices pumping early and spark the bats of the rest of the lineup.

Charlie Manuel is keeping it quiet as to who will be the DH for this game, but to be honest, I really dont care, whoever he plugs in will most certainly get the job done.  Whether it be the best PH in the majors in Greg Dobbs, the savvy Canuck Matt Stairs or the grizzled vet in Chris Coste, look for all to be swinging for the fences.  Let’s get an early one in Tampa guys.  GO PHILS!

Outcome: FINALLY, we are on gameday of Game 1 of the World Series.  After a week off, the Phightins start the World Series tonight against the Tampa Bay Rays.  A lot has been said leading up to the start of this series regarding the long layoff and how it will negatively affect the Phils, and it could.  But I just don’t see that happening tonight.  I think the Phils are a big stage team and are primed for this opportunity.

Cole Hamels takes the mound for the Phils facing off against another young ace Scott Kazmir.  This is obviously the first time both of these teams have faced either pitcher this year, so look for the pitchers to have the early advantage, and the beginning innings to be quick and strike out filled.  Look for the offenses to pick it up a little more into the 2nd and more so the 3rd time through the lineups.

I see the Phils bats striking the big blow first but the Rays will battle and keep it close. Then, what the Phillies really hope the entire series comes down too, the battle of the bullpens to begin.  The Phils have a decisive advantage in this department, one of their biggest going into the series, and look for that to be displayed in Game 1.  The Phillies pen goes an inning and two thirds of no hit ball as the Phillies take game one and home field advantage in game one.

Comments Off on The Starting Rotations

Well, after an amazing night in the 215 last night, the local sports scene takes a breather, as the Flyers are the only local team in action at Colorado.  We can shift some focus to scouting our Phillies potential World Series opponent (it feels so great to write that) as Game 5 of the ALCS is tonight in Boston.

The magical Rays try to move into the World Series tonight as they face Dice-K Matsuzaka and the Boston Red Sox in Fenway Park at 8pm.  The Red Sox find themselves in the similar position, down 3-1 in an ALCS, and the last two times they’ve completed the comeback en route to both of their World Series wins this decade.

Scott Kazmir takes the mound for the Rays.

In terms of effects on your Phightins, a Boston Red Sox comeback to a 7th game would be a dream scenario, letting these two teams beat each other up over seven games is really all any 215 fan should root for.  Look for AL Cy-Young candidate Matsuzaka to pitch well and live up to the moment tonight and force the series back to Tampa Bay for Game 6.

Comments Off on ALCS Game 5 Preview