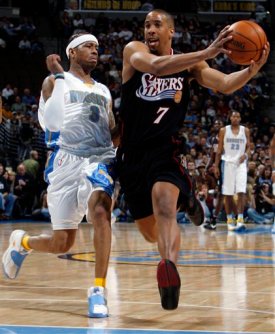 With the trade deadline only 36 hours away the Sixers could still be poised to make a monumental move.

Yesterday, 610 WIP broke the news that the Denver Nuggets, the Cleveland Cavaliers and the Houston Rockets are all seriously interested in trying to acquire the 76ers PG Andre Miller. It’s no surprise that Andre wants to get out of Philly, and who can blame him. The Sixers might be in the hunt for the final playoff spot, but they are nowhere near they need to be to make a run at a title shot anytime soon.

So I took some time and visited the old ESPN Trade Machine to see what we could work out with the three teams mentioned as having interest in Andre Miller.

Nuggets: Obviously we are not going to get A.I. back for Miller, but the Nuggets could be the best for the Sixers in terms of getting some talent back. Using the trade machine, I proposed Andre and Willie Green for Nene Hilario and JR Smith. This worked out for both teams as the salary numbers came very close and it’s something I can see both teams being interested in. Denver gets Miller and can move A.I. to shooting guard. Nene who is overcoming some health issues, could be seen as expendable on a Nuggets team that has seen improved inside play from Marcus Camby (phenomenal season) and Kenyon Martin (seems to back from his knee injury).

As a Sixer fan, I truly dislike Willie Green, not to mention his contract, which has him locked up for four more years. I would love to get rid of him in any trade and I feel JR Smith in return for Green, is a definite upgrade. Given the opportunity to receive more PT and take more shots (which he does not get in Denver) JR Smith could be a serious player. Who knows, maybe get a pick back in this deal as well.

Cavaliers: Chris came up with this trade between the two teams via the trade machine. Andre Miller to the Cavs and in return the Sixers would receive Boobie Gibson (only brightspot), Damon Jones, and Donyell Marshell. Personally, I dont like it at all, and dont know why the Sixers would do this trade. Damon Jones and Donyell Marshall are washed up and Boobie for Andre isnt exactly equal in my book.

The trade that I came up with and would go for in a heartbeat would be as follows; Andre for Drew Gooden, Boobie Gibson, and Ira Newble. Ira Newble makes or breaks this deal for me. HAA, kidding, he sucks, BIGTIME, but needed him in there to match up salaries. Obviously the Cavs need a PG so the 76ers need to take control and be in the drivers seat in this deal, or any for that matter involving Andre. I will not be happy if we give him away for nothing and get shafted like we usually do in every transaction we made (at least under Billy King, Stefanski – your on a short leash). Newble however, does have an expiring contract, and Drew Gooden is a very solid bigman. Well, a definite upgrade from Reggie Evans in my mind at the 4 spot. This is a trade I would condone as a fan and would actually be happy with.  Boobie “has tremendous upside” (always wanted to say that) and could be a great 2 guard in a few years.  Sam-U-EL, Drew Gooden, Iggy, Carney/Gibson, and Lou Will ain’t a bad starting five.

Rockets: Judging by my troubles getting a decent deal done on the trade machine, Houston looks to be the worst team to try and make a deal with for the Sixers. I don’t really like that many players on this team, especially in exchange for Andre. The best deal I could come up with was Andre and Willie for Luis Scola (PF), Shane Battier (SF), and Skip to My Lou, Rafer Alston (PG). I’d be very surprised if Houston would bite on this deal though. The only way I would consider doing a deal with the Rockets would be if we could dump a few contracts (Willie Green included) and we would have to receive picks in return.

Don’t get me wrong, I like Andre a lot and with the departure of Jason Kidd to the West, he could be the second best (active) PG in the East behind Chauncey Billups (Gilbert Arenas is better, but injured). Andre has been a team player and has played his heart out for this team but it is a fact he wants out, and it’s most likely in the best interest of the team.

So the questions remain:

What should the Sixers do with Andre Miller?

What do you think the Sixers will actually do?