Doug Collins, the next Sixer Coach?

According to a source: Doug Collins has offered his name up for the vacant Philadelphia 76ers Head Coaching position.  He specifically said that

‘Yes’ he would coach the Sixers if the job was indeed available (we all think it is) and they offered him the position.

Well heck Doug, let me toss my name out there too to be in the running.  Hey Ed Stefanski, Ed Snyder, I will also take the job if it is available and you offer it to me, and for way cheaper then what Doug Collins wants.

Anywaaaaayyy, I think Jimmy Lynam gets the gig.  He was basically calling all the plays anyway.

But really, Ed and Ed, this is for you.  Hire me.  I’ll gladly accept and work these boys to the bone.  Bring this great city a real championship, a BASKETBALL championship.  Put Philly Ball back on the map BAY BAY.

Comments Off on Doug Collins, the next Sixer Coach?

After winning in overtime last night against the Cleveland Cavaliers “B” squad, combined with the Bulls losing to Toronto, yourrrr Seventy Sixers

clinched the Eastern Conference’s six seed and a first round match up with the Orlando Magic.

The Sixers lost all three matchups versus the Magic this season and going into this series, there isn’t much that indicates the Sixers have a chance. But I feel the Sixers could make a series out of this. I’m not calling an upset, cause of seven words; Samuel Dalembert will be covering Dwight Howard, so unless Howard can do us a favor and get Dalembert into foul trouble early, he should dominate from opening tip of game 1 through the entire series, and he will be the deciding factor.

But with the return of Thaddeus Young to the lineup for the final two games will help him get his rhythm going into the playoffs and he will provide a boost and a spark that was missing during his injury. The Sixers will steal a couple games and make it a series, but I’ll take the Magic in 6.

Sixers Get Robbed in Dirty Jerz

Ok so Devon Harris didn’t walk (since when is 5 steps legal), or a self pass (loses it mid air, lands, grabs it again and shoots), or is the clock operator getting paid to fix this game, CRIPES.  In the longest 1.8 seconds known to man, Devon Harris does the unthinkable… Have a look for yourself:

From a friend of a friend:
I just watched the replay on ESPN; there’s NO way he was able to do all that in 1.8; he definitely traveled, too. Do the refs have their own time kept? Nothing the Sixers can do; hope that doesn’t come back to haunt them later in the season.

A Trade in the Making?

A three team deal is in the works between the Houston Rockets, YOUR Philadephia 76ers, and the Los Angeles Clippers.  The deal would include the following:

Hey according to the ESPN Trade Machine, it works.  God I hope this happens, as much as I like Andre Miller, I would love to see Baron Davis running this offense.  Imagine the starting lineup of Baron Davis, Andre Iguodala, Thaddeus Young, the rook Mareese Speights, and Marcus Camby.  Look out Boston, you got something to worry about in the Atlantic now. PULL THE TRIGGER STEFANSKI!

Comments Off on A Trade in the Making?

Elton Brand to Return to the Sixers on Saturday

Elton Brand’s long-awaited return to the Philadelphia 76ers will be on hold until at least Saturday.

Brand dislocated his right shoulder December 17th and worked out on the court before Monday’s game against Dallas. He was placed on the inactive list for the 16th consecutive game. Coach Tony DiLeo said Brand most likely will play Saturday against the New York Knicks.

The 76ers are 9-6 without Brand and have won a season-best seven straight games entering Monday. They were 11-14 when the 6-foot-8 forward was sidelined.

Despite missing 13 of his first 14 shots and 16 of 23 overall, the seven-foot forward hit a turnaround 17-foot jumper over Reggie Evans at the buzzer to give the Dallas Mavericks a 95-93 victory against Philadelphia, snapping the 76ers’ season-high seven-game winning streak.   Nowitzki received the inbounds pass with 4.3 seconds left and spun around the 6-foot-8 Evans to deliver the game-winning shot. 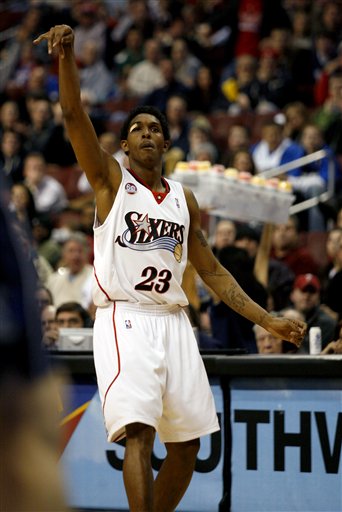 Andre Miller’s  3-pointer over Michael Redd with 28 seconds left helped the Philadelphia 76ers hold on for a rare road win Wednesday night, 110-105 over the Milwaukee Bucks.

Miller led the Sixers, finishing with 28 points and 9 boards and 6 assists.  With only 49 seconds left, Miller went down the floor and Redd barely reacted, looking for a pick and expecting a drive when Miller pulled up and answered with a 3 to push the lead to 107-103 and seal the deal.

Lou Williams scored 12 points and Thaddeus Young 10 for the Sixers. Milwaukee got 26 points from Charlie Villanueva, 18 in the second quarter, 20 from Redd and 11 from Ridnour.

Elton to Miss a Month

Sixers forward Elton Brand will be sidelined for a month because of a dislocated shoulder. 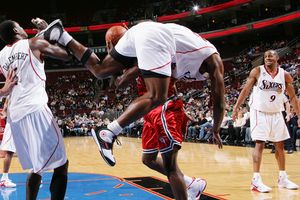 The 76ers leading scorer has a fracture and tear in his right shoulder but will not need surgery.  Brand was hurt Wednesday night in a 93-88 win against the Milwaukee Bucks.  Brand is averaging 15.9 points and 9.8 rebounds per game this season.

Comments Off on Elton to Miss a Month

Three days after the team gave him the axe, Mo Cheeks met with reporters on Tuesday to thank the fans and take responsibility for the poor start of a team which was thought to be a contender this year.

Sitting in front of a 76ers banner and behind a Sixers mic, fired head coach Maurice Cheeks took the blame.

Cheeks said he would be open to another position with the team, although he has not been approached about a job.

I’ve been a part of this town a long time and I don’t plan on going anywhere.  If the opportunity is there for me to be in the organization, I’m more than happy to do that.

Stephen A. Smith is reporting that the Philadelphia 76ers fired coach Maurice Cheeks on Saturday.

Assistant GM Tony DiLeo will be the interim head coach for the remainder of the season, the sources said.  Cheeks’ deal with the 76ers, who started the season 9-14, was guaranteed through next season.

After signing Elton Brand to a five-year deal worth nearly $80 million in the offseason, the Sixers have looked nothing like last season’s up-tempo squad that advanced to the playoffs.

The 76ers had lost eight of 10 games entering Saturday night’s game against the Washington Wizards in Philadelphia.

Comments Off on Cheeks Fired as Sixers Coach